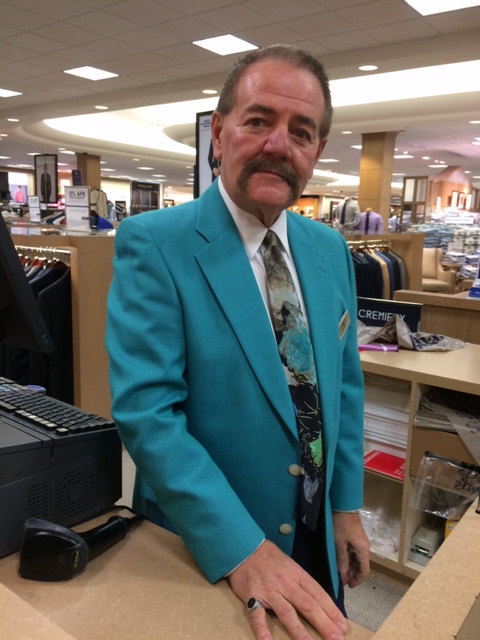 Super thrifter Sean Vincent lives in Florida, a Mecca of thrift and consignment shops, and he has the skill, knowledge and strategies to make the most of them.

Vincent, 72, lives in Estero, just south of Ft. Myers. A native Bostonian, he is a walking encyclopedia on the manufacturers and values of nearly everything. He knows clothing, as he worked in retail during college and now in his retirement years. He knows furnishings, as he ran an interior design firm with 17 employees. He closed the firm after his wife’s death, then moved across the state from Orlando nine years ago. He knows housewares and jewelry from being raised in a New England home that appreciated items like collectible china and heirloom pearls.

Add this to his thrill for the hunt and you’ll find him at a thrift or consignment store most days when he’s not selling men’s suits at Dillard’s. He has a game plan: he only shops stores on their extra discount days. He also chats up the staff. As a longtime regular, they will alert him to special items that have just arrived, like a $700 tags-on men’s suede jacket priced at $17.

“I sign up for all the loyalty programs as they can drop the price by 10 percent or more,” he related. “It’s a game and I like playing the treasure hunt.”

He checks in with Salvation Army stores on Monday for its color-coded discount and Wednesdays at Goodwill, where seniors get 15 percent off their purchases.

“I can walk into any store and find something amazing,” he said. “I touch furniture, I touch clothing. Don’t just see the item as it is — look at what it could be.”

At one visit to Goodwill, Vincent thought he had struck out. Then his eyes gazed at a golf club bag, a common sight in Florida thrifts. Stuck amid the irons and woods was a sterling silver sword, with a filigreed Three Musketeer-style handle. It was $9.99, less the 15 percent Wednesday discount, for a hand-crafted sword worth hundreds of dollars.

We connected with Vincent after admiring the vintage layered gold necklace worn by one of his coworkers at Dillard’s. She told us a bonus of friendship with Vincent is that he often gifts her with his amazing finds, like a pair of new Gianni Bini women’s espadrille wedges for $16 ($110 new) or a navy blue Italian leather handbag for $2. The necklace was a $3 purchase.

One of his best scores was at a VFW auction. There, he sat back as two matching pieces of artwork failed to get the starting $100 bid. The price dropped to $50, then $25. Still no interest. The auctioneer begged for an offer. Vincent said he’d buy both for $5 each. Sold, and Vincent walked away with two signed Erté Art Deco paintings from 1924 that Sotheby’s appraised at $32,000 each.

Another impressive proceed came from selling his grandmother’s Roseville pottery, a collection he increased by visiting thrift stores throughout Cape Cod. He gave them to an auction house and realized an amazing $35,000 from the teapots, cups and plates.

His interior decorating knowledge alerted him to an antique carriage lamp in a Florida thrift store. It was marked $10 and he knew its true value: $1,200. That was one treasure that he sold. Most of his purchases he keeps or gives to others.

He’s learned that a nearby Goodwill (on Corkscrew Road in Estero) is the beneficiary of unsold appliances from a nearby Target. If he ever needs a new mixer or toaster oven, he checks the Goodwill for appliances with the tell-tale “TG” tag.

“I have a friend who decorated her $400,000 home completely from Goodwill,” he said. “It’s totally possible.”

Yard sales also attract him. In Orlando, he found a solid marble vase with ebony marble base and unusual elephant heads as handles. The owner said her husband had brought it back from Italy after World War I. Vincent paid her full price – $10. He instantly took it to a florist to fill with flowers and got offers in the shop to buy it for hundreds of dollars. It remains in his home today.

His best clothing find was a pristine black topcoat with satin lapels, meant to be worn over a tuxedo. He found it for $5 at his nearby Salvation Army on Route 41 and wore it last Christmas when he went to the opera up north.

“My dream is to open a store with my finds,” Vincent said.

If he realizes that dream, ThriftStylers will be at his doorstep, anxious to purchase his well-chosen treasures.